Where did lawns come from?

Where did lawns come from? How did the first lawns originate? This and more in this infographic on the history of the lawn. It is thought that the first lawns were inspired by the low turf grasses of the African savannas. These low turf grasses allowed humans to see danger from a distance as well as stalk their prey. When did sodding begin? Sodding, or turfing first appeared in a Japanese book published in 1159 AD. Early sod in Japan was harvested by hand. Although other cultures likely used sod too, the earliest record of sod comes from Japan. When did low-growing turf grass lawns become popular? Around the 12th century the culture of turfgrass lawns began to root itself deeply in society. Back then the grass was kept short by grazing farm animals and use of a scythe. What is a bowling green?Bowling greens first rose to popularity in the 12th and 13th centuries. Bowling greens were popular spaces where games like cricket, tennis, croquet courts and even golf were played. Latter, in the 1500’s soccer was played on turfgrasses which were maintianed public yards. Where does the word lawn come from? The earliest known etymology of the word “lawn” goes back to the Celtic Brythonic word “lan/llan/laun”. These early versions of the word lawn, referred to an enclosure often used in relation to a place of worship. The middle english spelling of the word lawn was “launde”, referring to a glade or opening in the woods. The word lawn has changed throughout the history of the lawn. What was the first lawn mower? The first mechanical lawn mower was invented by Edwin Beard Budding in 1830. This lawn mower was a reel push mower and was primarily used to mow turf grasses near ornamental gardens and large recreational areas. This was a huge advancement in the history of the lawn. Check out this infographic for more information. When did people begin using lawn mowers commonly? In 1890, mass production enabled the public to be able to afford lawn mowers for their own homes. Mass production put the lawn mower into the public's hands in 1890. When was the first gas powered mower made? In 1902 Ransomes of Ipswich invented the first known gas powered mower. This was a major step in the history of the lawn, and is a major influence the modern lawn. The lawn is centuries old, and this rich history has tied society together across cultures and generations. Now the modern lawn is commonly a turfgrass based lawn, and there are countless methods for caring for them. Share this infographic on the history of the lawn with your friends and family!

How to Maintain Your Lawn and Lawn Mower

How to identify, treat and avoid poisonous plants. An Illustrated Guide. 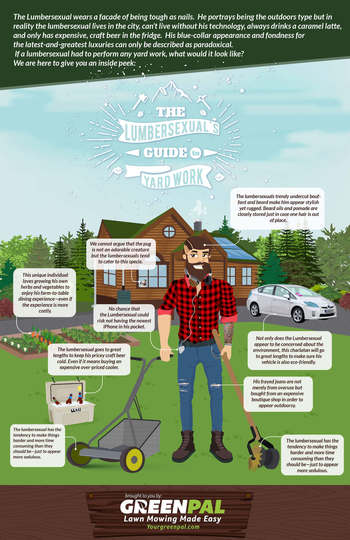 The Lumbersexual's Guide To Yardwork

Are all lead generation sites the same in the lawn care industry?

The ultimate guide on how to mulch your tree rings [Infographic]

To Tip or Not To Tip

SUN TZU and the art of small business