HELP! My Sprinkler Head is Busted! What will it cost to repair? {And how to DIY}

HELP! My Sprinkler Head is Busted! What will it cost to repair? {And how to DIY}

Run over the sprinkler head with your lawn mower?

Is your sprinkler head not functioning as it should?

Well… If you have invested in irrigation for your lawn and landscape, you will likely run into a busted sprinkler head at least once in your life.

So, what is a fair cost to replace a sprinkler head?

And how can you repair the sprinkler head yourself?

All that and more below!

In Short: What does it cost to repair a sprinkler head?

Our research suggests the average cost to repair a sprinkler head professionally (including parts, labor, and service charges) varies from $75 to $150.

The cost varies greatly due to different pricing models irrigation companies use to charge for service calls. Additionally, pricing may vary depending on what part of the country.

And the cost can be much less if you repair it yourself. Instructions below. 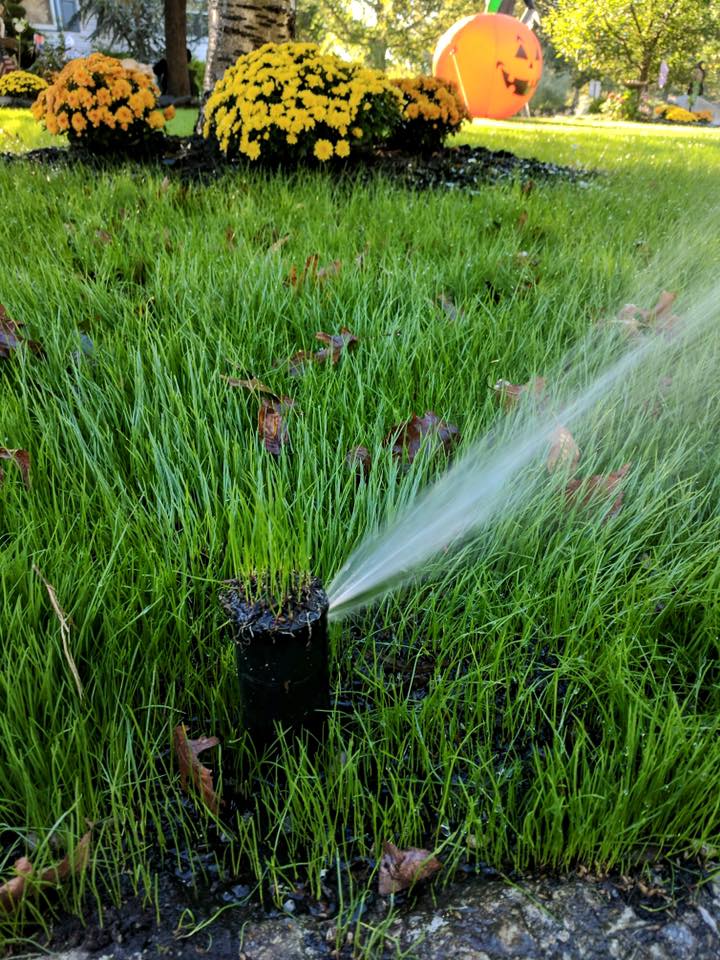 Is the repair covered by the installer's warranty?

The very first thing you should look into when looking into a sprinkler head repair is whether or not the repair is covered under the installer's warranty.

Look, installing an irrigation system is a serious investment, and it comes with inherent risks. And some sprinkler heads may be faulty or pre-maturely break.

So depending on your installer and how the sprinkler head was damaged or broken. The repair may be covered under your installer's warranty. If possible, check with them first.

So if the repair is not covered…. How much should you expect to pay for a  sprinkler head repair?

How Landscapers Charge For Sprinkler Repairs

Fair Warning! The answer to what a fair cost to repair a sprinkler head varies MASSIVELY!

Landscape irrigation is like plumbing for your home. If the company conducting the repairs was also your installer, you will likely pay much less than if you have to call a new company in that doesn’t know your system.

For example, if your irrigation installer has to conduct the repair, it will likely be much less expensive. Not only did they install the system and know it well, they already made their largest profit on the installation so they can conduct the repair without extra fees.

On the other hand, if you hire a company that is not familiar with your irrigation system, they are likely going to charge a flat rate just for coming out, and then add the repair fee on top of that.

Much like a plumber who doesn't know your plumbing charging a flat rate fee for simply showing up to diagnose the issue.

So what is a fair rate for a sprinkler head repair?

Sprinkler head repairs can range from as little as $75 to as much as $150.

One irrigation installer, Residential Irrigation Specialists, reported to us that they charge about $115 for parts labor, and service to replace a sprinkler head.

Again the biggest factor causing the varying the cost to repair is what a company charges for the service call itself. Which is typically at least $75, just to have them come out to your property.

But some companies offer a total system check with their service fee so it may be worth the cost: 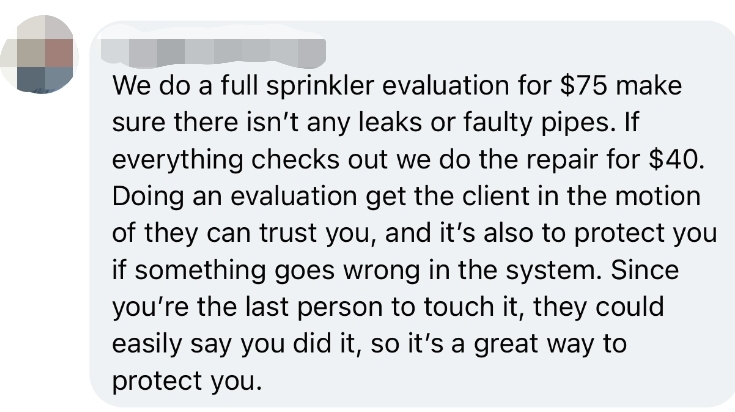 If you only need to replace one sprinkler head and want a good deal. You want to find a company that will install the sprinkler head without charging a service call fee.

And by finding a company that won’t charge a service fee you will only spend about $50-$90 for the repair cost.

Or you could replace the sprinkler head yourself for even less… 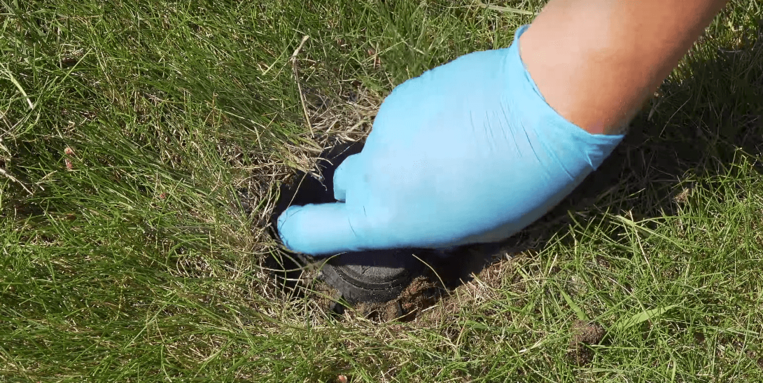 How To Replace a Sprinkler Head Yourself

Good news! Sprinkler heads are easy to replace. Just be sure to winterize your irrigation system properly to avoid even more headaches down the road!

All you will need is a: 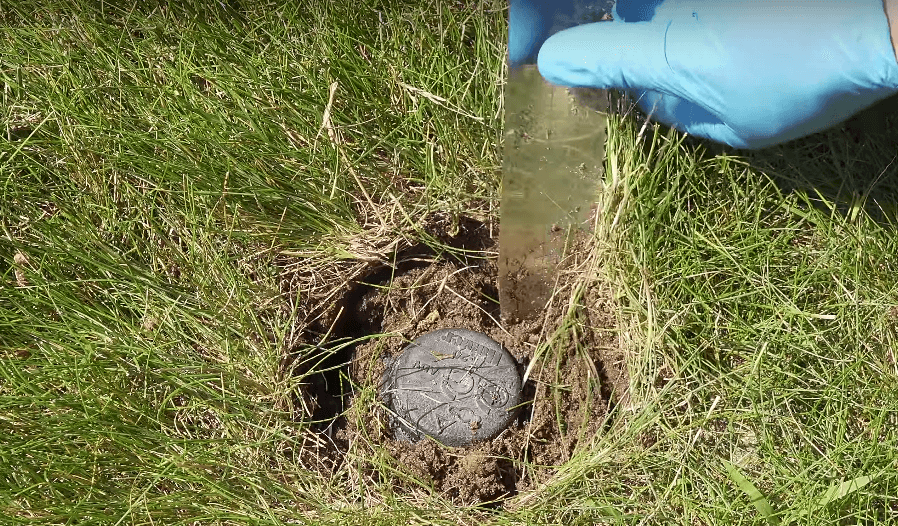 Step 1: Use the Knife to Remove Turf Around the Sprinkler

Using a knife simply cut a circle in the turf surrounding the sprinkler head.

WARNING! Do not go too deep or you will risk cutting the irrigation line.

Step 2: Pour the Cup of Water

Next, you simply want to pour the cup of water around the sprinkler head

It’s simple, the water will prevent dirt from falling into the hole while you remove the busted sprinkler head and install the new one.

Simply remove the old sprinkler head by turning it in a counterclockwise fashion.

Then lift the head out carefully so as to not kick any dirt into the hole.

Now it's time to finish the job by screwing on the new sprinkler head.

As it says on the sprinkler head, do not use pipe dope or Teflon tape.

Simply slide the sprinkler head carefully down the hole being careful not to kick in any dirt, and tighten it on.

What are the causes of broken sprinkler heads?

Sprinkler heads may not function properly for a variety of reasons, and when they do they will not water the lawn properly.

The main issue that affects sprinkler heads is dirt and debris building up in the sprinkler head. But roots can also wreak havoc on your irrigation system.

As dirt builds up in the head it may not go up and down as it should, or it may get clogged up.

Either way, the effectiveness of the sprinkler head diminishes over time, and you may wind up with a brown patch of underwatered grass in the lawn. 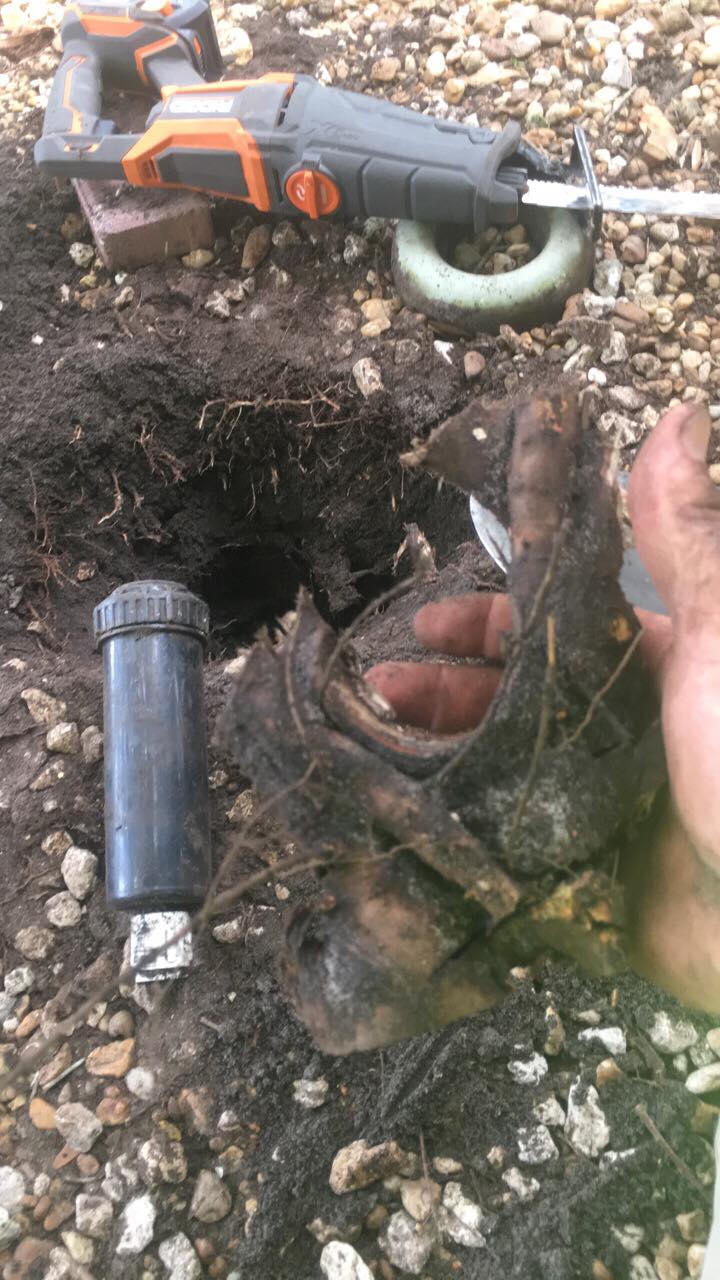 As you can see there is quite a range in pricing across the board when it comes to sprinkler head replacements.

Unlike the cost of mulch per yard which is pretty steady. The cost can range anywhere from $75 to $150 with the average cost being around $115.

But this will greatly vary on the company you call and whether or not you have an existing maintenance contract with them.

Fortunately, you can replace a busted sprinkler head for much less yourself in about 10 minutes.

If you are looking for more related articles check out our lawn care blog for homeowners.